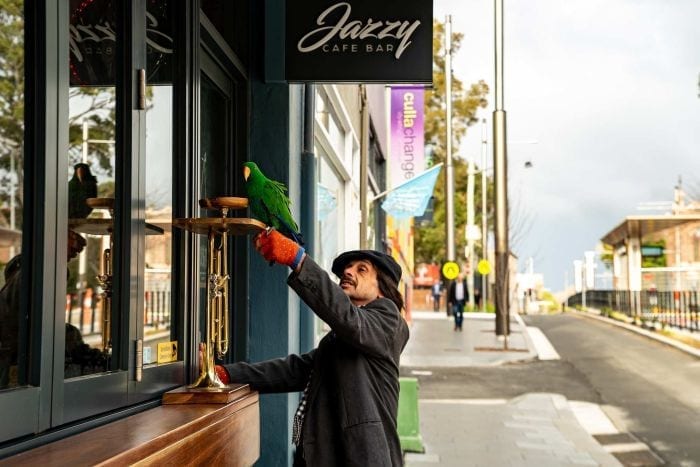 Peter Pierre Gawronski has been making the headlines across Australia lately as the “bizarre birdman” who has won countless cases against the NSW Land and Housing Corporation. Gawronski was recently summoned to a meeting with housing officials at the beginning of August, where he arrived at court with his rainforest parrot, Caesar on his shoulder.

Although Peter has earned a reputation for his odd appearance and his love of his birds, he’s more than just an eccentric figure. Gawronski has also won at least 10 actions against the NSW housing and land corporation in the last 3 years. These actions included forcing the landlord to repair sewage lines, mend gas leaks, get rid of rubbish, and fix a local rat problem.

Peter took Australia’s biggest landlord to court by himself, with no legal training or extensive education in the law, and absolutely no computer. He noted that many tenants in public housing are reluctant to complain about the conditions that they live in. However, Gawronski is determined to make a difference.

Peter and his parrot Ceaser have prompted significant change for their neighbours. Earlier in 2019, the Australian courts ordered the housing department to conduct a full review of their waste management strategy on-site after Peter complained about the amount of rubbish around the 70-year old buildings that his fellow tenants lived in.

Unfortunately, it has always been notoriously difficult for people like Gawronski to come forward about issues with public housing, as taking a company to court can be a costly experience. Peter has attempted to keep costs low by using no legal expertise. Despite an absence of help, he has managed to come out on top time and time again.

Peter has achieved incredible success with his legal complaints despite a difficult and troubled life. In an interview with the media, Gawronski claimed that he first entered public housing 20 years ago, after a painful health condition meant he was unable to work. Although he has had a few run-ins with the law over the years (including drugs and assault charges), Peter has turned his life around with a new quest to make the state of living more comfortable for him and his neighbours.

Plans for a Better Future

Although Peter remains positive about his vision of a better future, he fears that one day, his home will be taken away from him. His estate currently sits within an inner-city in Sydney, in Surry Hills. This location could easily be worth hundreds of millions of dollars to the right developer. If the NSW Government sold off these aging inner-city housing options to pay for newer, more modern housing, Peter would be left with nowhere to go.

It seems as though this outcome could be growing increasingly likely, as earlier this year, a former public housing block called “The Sirius Building” was sold for a total of $150 million. However, the Department of Communities and Justice in NSW say that there are no plans currently in place to sell Mr. Gawronski’s estate.

Peter hopes that his efforts to force the department to keep his home and the homes of his neighbours in good condition will help to improve everyone’s quality of life while reducing the risk of the block being sold off. Mr. Gawronski noted in an interview that if the group spends millions bringing the building up to scratch, then it’s harder for them to decide that they want to knock it down in the near future.

As the COVID-19 health crisis continues to unfold, and governments enforce stay-at-home orders worldwide, it can be impractical to continue to search for apartments or

What is a Loft Apartment?

If you’ve ever picked up a copy of Architecture AU or Home Beautiful Australia, you’ve most likely come across a loft apartment.  In real estate

How Much Does an Apartment Cost In Melbourne?

Are you planning on moving to Melbourne?  Melbourne has one of the best living standards in Australia, second only to Sydney. As the State capital

What to Look For When Buying an Apartment

Owning a home is one of the best life decisions you can make.  If you’ve settled on a buying an apartment, wither as an investment

Online Apartment Shopping Becoming the Norm
What is a Loft Apartment?
How Much Does an Apartment Cost In Melbourne?
What to Look For When Buying an Apartment