Looking For A Home Loan? Get Pre-Approval Today

One industry that has fared well throughout the COVID-19 pandemic, to the surprise of many, is Victoria’s rooftop solar industry.

Solar Victoria, a Government Body that sits under the Department of Environment, Water, Land and Planning has offered a number of rebates for rooftop solar and there has been a surge this year as residents have spent more time at home and are looking at ways to reduce their power consumption.

Extensive rebates and interest free loans have been appealing to consumers and there has been a 40% year on year increase in the uptake in solar PV in Victoria.

The Solar rebates are available to landlords and tenants, meaning more Victorians are eligible to take advantage of Solar PV and the lower energy bills associated with this. Government incentives and created a win-win situation for the solar industry in Victoria as well as for residents who are looking for reduced bills and a lower carbon footprint.

The uptake of solar installations during the pandemic has surprised the industry but when you think about it, increased interest in solar probably makes sense.

This led to many Victorians experiencing what is commonly referred to as “bill shock,” a situation where a resident receives unexpectedly high bills. Surveys consistently say that bill shock is a very real concern to a majority of Victorians.

Many homeowners took advantage of solar rebates but it’s also becoming increasingly popular amongst landlords. Many landlords recognise the appeal that solar panels gives their apartment. Installing a solar system on a rental property creates loyal tenants who see the support that you have given them to enable them to reduce their power bills. It can also make it more appealing to new renters in the future. Further, it also increases the value of a property.

Solar rebates and the increasing interest in placing solar panels on rental properties is good for everybody. It’s good for landlords as we’ve shown above. It’s good for renters as it reduces their power bills. Importantly it’s great for the environment as it reduces our overall carbon footprint. By ensuring that rental properties can access rebates the Government has recognised a group previously excluded from the market.

Further, the Government has recognised that in some circumstances the landlord and tenant may want to co-invest in a solar panel system with the tenant providing some contribution to the system as they know that they will both benefit from the installation of a system.

Whilst historically solar panel systems have most commonly been seen on houses there are an increasing number of apartment blocks looking at solar panel installation. There are a number of options here. You can look at panels just for common areas paid for by the body corporate or there are options to share the benefits of the panels amongst all apartments within a building.

All options have their pros and cons in an apartment block but that doesn’t mean that you shouldn’t explore them.

A solar panel system will reduce bills for all tenants and also the carbon footprint of the building. It’s a win-win situation for the apartment block and the planet.

PrevPreviousWhat the CBD Could Look Like In A Post-Pandemic World
NextACCC: Australians paying “thousands” more by sticking with older Home LoansNext 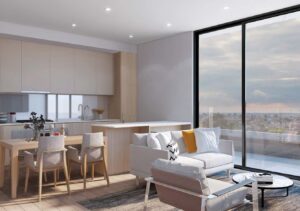 Why Invest in a 1 Bedroom Apartment in Melbourne?

Why Invest in a 1 Bedroom Apartment in Melbourne?

Pre-Settlement Inspection Checklist [Must Read Guide]
Why Invest in a 1 Bedroom Apartment in Melbourne?
8 Tips to Negotiate Buying A Property In Australia